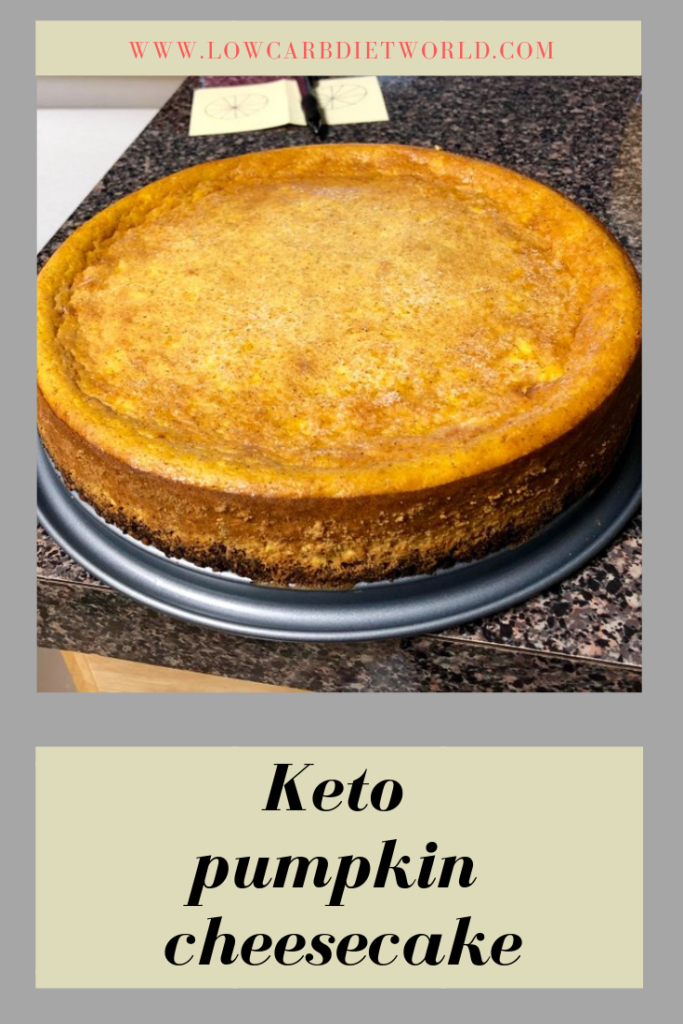 Seriously, you won’t even be able to tell that this is a low carb pumpkin cheesecake. It tastes like the real thing.

So, out of all the pumpkin ideas I have right now, why keto pumpkin cheesecake? Well, because you asked for it!

– Set the 2 bricks of Cream Cheese out on the counter at least 1 hour before you start this recipe so that they can properly soften. Set the eggs out about 30 minutes before you start to let them get closer to room temp.

– Preheat your oven to 350°F before you get started, because this is a pretty quick recipe to get in the oven.

– In a small mixing bowl combine the Cinnamon, Nutmeg, and Ginger.

– Either crush your Pecan Halves in a Food Processor, or simply use Chopped Pecans. (i used a food processor)

– In a medium mixing bowl add 1 Egg White and then whisk until completely foamy.

– Add the Pecans to the Egg White and then mix thoroughly.

– Season the Pecan and Egg mixture with 1 Teaspoon of the Pumpkin Spice mix and the 2 Tablespoons of Golden Monkfruit.

– Press the crust mixture into the bottom of your 9-inch springform pan and spread around evenly. This will produce a rather thin crust that should be about 1/8″ thick all around. Bake the crust for about 10 minutes in the oven at 350°F and then remove immediately and set on the counter.

– In a large bowl, begin to blend the Cream Cheese together with a hand mixer until evenly whipped.

– Grease the sides of the Springform Pan before you spoon the cheesecake batter in, and spread as evenly across the pan as you can.

– Place the cheesecake into the oven at 350°F on the middle rack and allow to cook for approximately 45 minutes. Keep an eye on it though throughout the cooking process. The batter will be a little runnier at first than a normal cheesecake batter due to the added pumpkin, but it will firm up and stop jiggling. (in my oven it was done right at 40 minutes so definitely keep an eye on it towards the end)

– Remove from the oven when you believe it is done, and set on the counter to cool for about 20 minutes before placing in the refrigerator to cool for at least 4 hours (overnight preferably). Do not plastic wrap or cover the cheesecake with foil before putting in the fridge or else it will retain too much moisture on the top, but also do not add to a fridge that had exposed seafood or onions, as those flavors will seep into the cheesecake and ruin your day. You can wrap the cheesecake finally after it has sat in the refrigerator for at least 4 hours, as it has probably let off most of it’s condensation at that point.