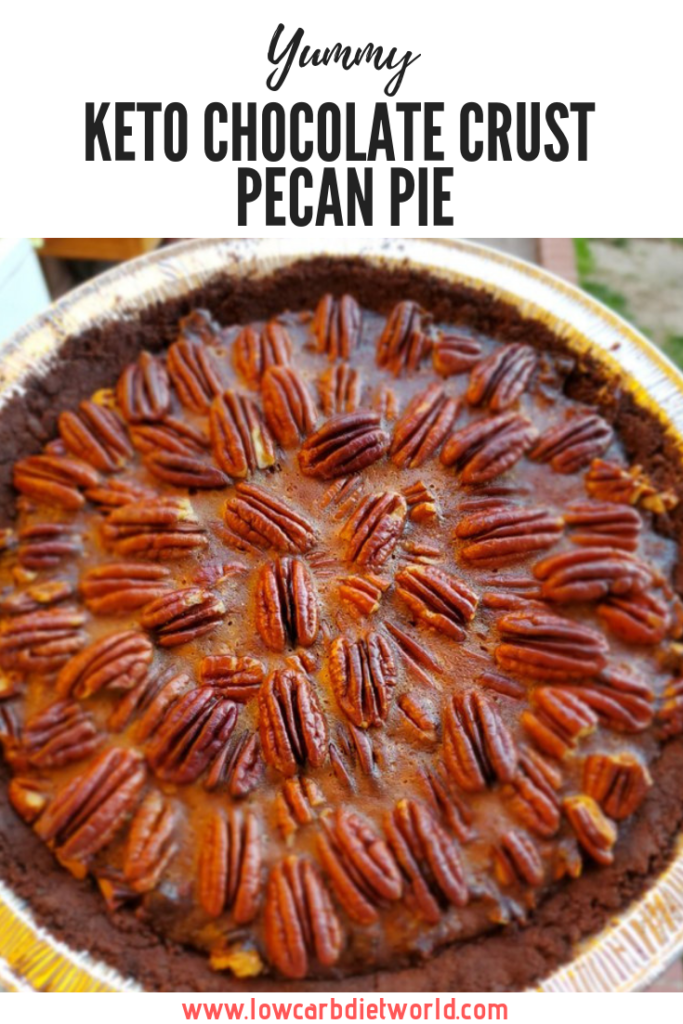 This keto pecan pie recipe is the only one you’ll ever need for the best sugar-free pecan pie ever! Easy to make and just like the real thing.

Preheat the oven to 350 degrees F (177 degrees C). Make the almond flour pie crust according to the instructions here. Meanwhile, make the filling. In a large saute pan (not a saucepan!) over medium-low heat, heat the butter and sweetener for about 5 minutes, stirring frequently, until dark golden brown. When golden, add the cream and sea salt. Bring to a gentle simmer. Simmer for 15 to 20 minutes, until bubbly, dark golden and thick. The caramel sauce should coat the back of a spoon. Remove the sauce from heat. Stir in the vanilla and maple extracts. Let pie crust and caramel sauce cool separately for 15 to 20 minutes, until warm but not hot. While they are cooling, you can either leave the oven on (you will need it again) or preheat it to 350 degrees F (177 degrees C) again when the 20 minutes is close to up. Once caramel sauce has cooled enough not to cook an egg being added to it (warm is fine), whisk in the egg. Place chopped pecans evenly into the crust. Pour the caramel/egg mixture over the pecans. Top with pecan halves. Cover the edges of the pie crust with foil, leaving the center open. Bake for about 40 to 50 minutes, until the top is dark brown and the filling is set, except some bubbles on the top. Cool completely, then chill for at least an hour before slicing.

Preheat the oven to 350 degrees F (177 degrees C). Line the bottom of a 9 in (23 cm) round pie pan with parchment paper, or grease well. In a large bowl, mix together the almond flour, erythritol (if using), and sea salt. Stir in the melted ghee and egg, until well combined. (If using vanilla, stir that into the melted ghee before adding to the dry ingredients.) The “dough” will be dry and crumbly. Just keep mixing, pressing and stirring, until it’s uniform and there is no almond flour powder left. (Alternatively, you can use a food processor to mix it all together.) Press the dough into the bottom of the prepared pan. You can flute the edges of desired; if it crumbles when doing this, just press it back together. Carefully poke holes in the surface using a fork to prevent bubbling. Bake for 10-12 minutes, until lightly golden. (Add fillings only after pre-baking.)